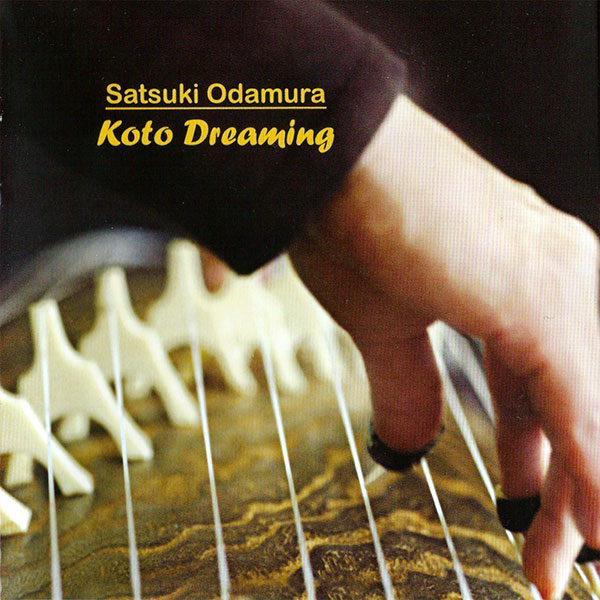 Launched February 2006
Satsuki Odamura’s new CD, Koto Dreaming is a collection of innovative and uniquely Australian multicultural compositions for koto. Koto Dreaming breaks away from the traditional sounds and compositions for koto, and includes Satsuki’s own collaborative compositions with Australian artists. It is a synthesis of her inspirations gained by her working closely with Australian artists and a culmination of her fifteen years accumulative experience as a koto virtuoso based in Australia.
Koto Dreaming begins with a work commissioned by celebrated Australian composer Ross Edwards and includes pieces by composers Caroline Szeto, Anthony Briggs, Linsey Pollak, as well as Satsuki herself, in collaboration with Sandy Evans and Tony Lewis – who together comprise the trio Waratah.

Review of Koto Dreaming
Satsuki Odamura’s first touch of the koto on this album made my hair stand on end. In the wake of five minutes of sad dignity from John Napier’s solo cello it came bolting through the air like an electric charge, as part of the Ross Edwards composed title track. In his first attempt at writing for koto, Edwards has collared both the metallic harshness and willowy softness it is capable of in Odamura’s hands.
This is Odamura’s third CD since arriving here in 1988, and the second to feature works for koto by Australian composers. Some (like that of Edwards) are fully scored and some embrace improvisation, as Odamura has done to such brilliant effect with Sandy Evans and Tony Lewis in the trio Waratah, which is also represented here. Another piece in the improvising camp has her lush bass koto performing a shy but ardent dance with Linsey Pollak’s soprano saxophone on his Pretang. Across the broad sweep approaches there is always a calming undercurrent to her koto sound.
John Shand, Austral-Japanese
Sydney Morning Herald, Spectrum
March 18-19, 2006 p.36