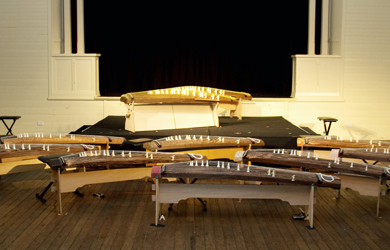 The Koto is one of the most popular traditional Japanese instruments. To many, the character of koto music is evocative of traditional Japan, with the attributes of the western harp, dulcimer and lute.
Many Japanese legends refer to the origins of the koto. A popular one says that the koto was formed in the shape of a crouching dragon, a charmed and mythical creature of ancient Japan and China.
The koto was brought to Japan around the end of the seventh century by Chinese and Korean musicians who came to play in the Japanese court orchestra, the Gagaku. The early Edo period (around the 17th century) saw the rise of the koto as a popular source of entertainment for the wealthy merchant class.
Most of the composers and musicians of the Edo period were blind and formed guilds for both economic and professional reasons. The guilds gave rankings and grades to the players, the highest being kengyo (master). The grading system continues today. 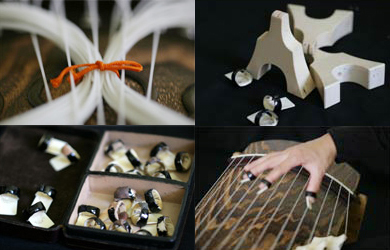 The thirteen strings of the koto, seventeen for a bass koto, are stretched along a soundboard of nearly two metres made of hollowed out paulownia timber. The strings were traditionally made of silk, nowadays synthetic.
The koto is tuned for different songs by bridges of ivory or plastic, placed along the body of the instrument under the strings.
The player sits facing the right hand side of the koto and the strings are plucked, scraped or strummed with ivory plectrum on the thumb and the first two fingers of the right hand, the left hand applying pressure to vary the pitch. The resulting music ranges from the simplicity of the traditional to the melodic as well as the challenging contemporary pieces.