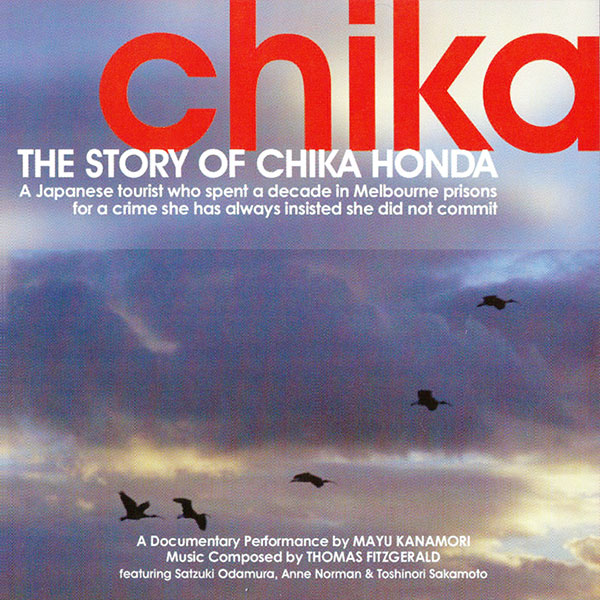 The music for CHIKA was composed by Thomas Fitzgerald, with one exquisite work, the Koto Solo composed by Satsuki Odamura. Satsuki also gave virtuosic advice throughout on the magical nuances of Japanese music.
The unusual collaboration of instruments featuring Satsuki Odamura on koto and bass koto, Anne Norman’s shakuhachi, Toshinori Sakamoto’s wadaiko and Thomas Fitzgerald playing acoustic and electric violin and keyboards, blends live music and pre recorded acoustic and electronic sounds with a unique result. Some sequences involve extensive improvisation, other works are traditionally notated and interpreted in a more defined way, especially when combining with electronic sounds. It is the sum of these myriad combinations of a surreal reality that have become CHIKA’s musical world.
CHIKA was created for Mayu Kanamori’s multi-media production of “CHIKA: A Documentary Performance” which premiered in Melbourne in 2005. The radio feature CHIKA was first aired on ABC Radio National’s Radio Eye in 2004 and was finalist in the Walkley Awards for Excellence in Journalism.
The production crosses the genres of journalism, visual and performing arts, incorporating original live music, dance and narration, documentary images, archival video and recorded interviews to tell a story – the story of Chika Honda.
Chika is a real person. She is a Japanese woman who spent a decade in Australian jails for a crime she has always insisted she did not commit. She was one of a Japanese tour group arrested for importation of heroin in 1992. She was released on parole in November 2002 and is now living in Japan.
CHIKA is a story of human endeavour, of overcoming adversity with multiple layers of experience, bringing forth a multi-dimensional understanding of the human condition with the immediacy of unscripted and unrehearsed voices, the reflective nature of still images and the evocation of live music and physical expression.